Log4j Zero-Day Exploit: The Most Critical Vulnerability of the Decade That Puts Countless Servers at Risk

The Apache Software Foundation released an emergency security update on 10th December 2021 to patch a vulnerability in Log4j (version 2) nicknamed Log4Shell. It was discovered on 9th December as a 0-day exploit with publicly available POC. The Log4j Java library provides logging capabilities. The vulnerability initially disclosed to Apache several weeks ago by Alibaba’s security team is named CVE-2021-44228. It is claimed to be severely critical with a 10–resides CVSS score in Log4J’s lookup capability in combination with JNDI (Java Naming and Directory Interface). The Apache Software Foundation released the 2.15.0 version to fix this remote code execution vulnerability (CEV).

Referring to one of the Github attack surface trackers, major players such as Apple, Amazon, Twitter, Cloudflare, and many more are confirmed to be vulnerable to Log4j2.

According to Apache guidelines, even if you are unable to upgrade to the 2.15.0 release, you can still mitigate this in 2.10.0 or higher with the below configuration tweaks:

For older releases from Apache versions 2.0-beta9 to 2.10.0, you can remove the JndiLookup class from the jars in the classpath.

Apart from the above modifications, you could take the below preventive measures:

One can use several approaches for threat hunting to identify exploitation attempts made by threat actors. Here are some of them:

To exploit the Log4j vulnerability, the vulnerable java component needs to make an outbound connection attempt to LDAP, RMI or standard DNS. Monitoring this attempt for connection using the below detection rules can indicate any possible attempts made by the adversaries:

[process where event.type == “start” and

Below are the strings that could be matched in the log statements for user-agent or cs-User-Agent or cs-uri or cs-referrer contains:

It was a really extended weekend for our security experts. SharkStriker’s 24/7 security operations center has worked extensively on this major security event. Below is a list of activities done on a war foot level: 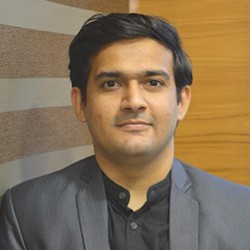 Jenil is a Security Architect at Sharkstriker. With a master's degree in Information Security having strong hands-on experience on various technologies makes him a Trusted Security Advisor, Jenil translates complicated Cyber Security challenges into everyday language that is easily understandable by businesses. His expertise includes EDR/MDR/XDR, Threat Research, Security Audits. In his free time, Jenil loves to play video games on his gaming console, reading books & pursue his passion for cricket. You can reach Jenil at jenil.sadrani@sharkstriker.com.