Understanding the Mindset of Hackers plays a crucial role in overcoming cyber-attacks and knowing the overall cybersecurity posture of an organization. We have explained this briefly in our previous blog.

So let’s deep dive into the test environment…

The Detection Lab is an out-of-the-box lab environment for testing and eliminating blind spots in your defense controls. To carry out its functions, it makes use of Vagrant, VirtualBox, Packer, and a Host Computer. The out-of-the-box lab includes virtual computers that simulate a Domain Controller, an Event Forwarder, a Logger, and a Windows 10 Endpoint, all of which are important components of any infrastructure. You can replicate attacks in this lab and see what you’re missing.

Hardware Requirements: Listed below are my Hardware Specs they recommend this be your minimum hardware too.

Step 1: Open PowerShell as an administrator.

Step 2: With PowerShell, you must ensure ‘Get-ExecutionPolicy’ is not Restricted

If you did it right, it should show RemoteSigned.

Command: choco install virtualbox
Will take an hour to half day depending on the internet speed

After you’re done, navigate to the vagrant directory and check if all the hosts are up.

As you can see below, all four virtual machines are up and running.

Apart from this, we can also integrate our own solutions So that we can analyze the effectiveness. Red teams can leverage this tool by learning what defenders see and modifying their attacks.

So for that, install your own agent in the WIN10 (example for the reference)

Hence, the set is complete and running, now moving to the next part.

Installation of this tool is very easy and involves no complicated steps:

For only installing the execution framework along with the Atomics folder:

Hence, all the set-up part is complete. Now, we will proceed further

First, we have to get & check the prerequisites

After that we have to perform the attack by testnumbers:

ANALYSIS OF THE ATTACK

Here we can clearly see in the command line that wce.exe is used, also we can see in the below image that the malicious file is Detected and gets quarantined.

IN SIEM: by looking at the command line shown in the image below we can clearly see that path of output file passwords/hashes at %temp%/wce-output.file.

The memory of lsass.exe is often dumped for offline credential theft attacks. This can be achieved with Sysinternals ProcDump.

Upon successful execution, we have to look for procdump.exe, lsass_dump.dmp

As we can see the command line:

Hence, we are able to detect this Attack

Adversaries may attempt to get a listing of other systems by IP address, hostname, or other logical identifiers on a network that may be used for Lateral Movement from the current system. Functionality could exist within remote access tools to enable this, but utilities available on the operating system could also be used.

Identify remote systems with net.exe. Upon successful execution, cmd.exe will execute net.exe view and display results of local systems on the network that have file and print sharing enabled.

Hence, here we can clearly detect this attack

Identify remote systems via ping sweep. Upon successful execution, cmd.exe will perform a loop against the 192.168.1.1/24 network. The output will be via stdout.

Here, by looking at the command line we can clearly see that it’s performing a ping sweep

Upon successful execution, cmd.exe will execute arp to list out the arp cache. The output will be via stdout.

Here also we can clearly see that, it has been detected

Adversaries may attempt to make an executable or file difficult to discover or analyze by encrypting, encoding, or otherwise obfuscating its contents on the system or in transit. This is a common behavior that can be used across different platforms and the network to evade defenses.

Creates base64-encoded PowerShell code and executes it. This is used by numerous adversaries and malicious tools.

EDR: It was detected by our EDR. We can look at the below command line, there are some encoded Powershell Commands.

SIEM: In SIEM too we can see the encoded command, so the attack has been detected as shown below:

Finally, as we have seen above the commands to run the test are quite simple, the core command is the same, we just have to update the Test numbers. Similarly, one can run all the Available attacks and check the Security Posture & Efficiency of the solutions.

You can leverage SharkStriker’s range of Cyber security services to improve your defense and seek the help of our experts to test your cyber defense. Our ORCA-based MDR service can help in detecting and responding to such attacks in real-time. Standing for Observe, Response, Compliance, and Awareness, ORCA-based services can enable continuous monitoring and centralized visibility for quick detection and real-time response.

About the Author: Utsav Rai 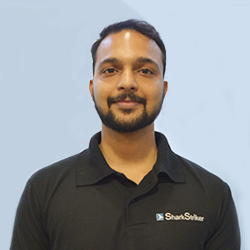 Utsav Rai is a Security Analyst at SharkStriker. He is holding a Master’s degree in CyberForensics. Also, he's a CHFI certified Cyber security enthusiast with strong threat research and hunting skills. During his free time, He loves to read books, play cricket, and Video games. You can reach out to him at utsav.rai@sharkstriker.com